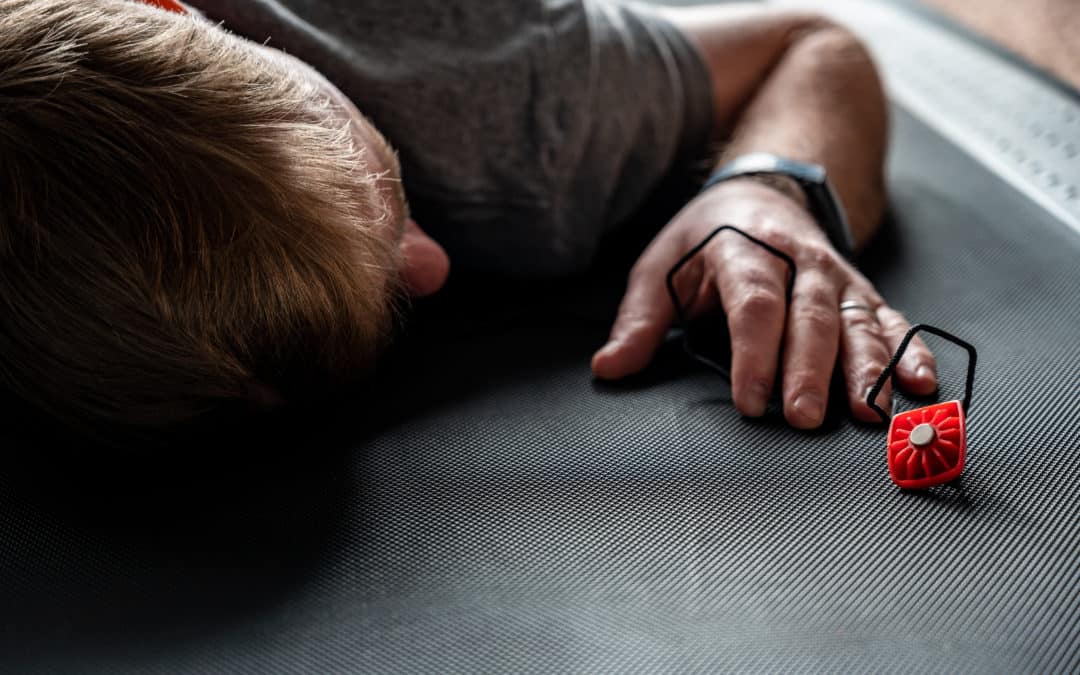 Treadmills are a great, convenient way to exercise. You can use them anytime, at home, in the gym, and exercise at your own pace. But treadmills can be dangerous. Thousands of people suffer treadmill injuries every year, including children. And recently, Peloton’s treadmills have been the subject of numerous, national stories questioning their safety. As a treadmill injury lawyer, I will discuss the common issues concerning treadmill injury lawsuits.

Yes, treadmills can be dangerous.

Does this mean people should stop using treadmills? No. Treadmills can be used safely and are, of course, a popular piece of gym equipment.

Yes, treadmill injuries are fairly common. As noted above, more people injure themselves on treadmills than any other type of gym equipment.

This does not come as a surprise, given that a treadmill’s moving belt is quite powerful and can easily throw off its user or suck things underneath the belt.

Who gets sued in treadmill injury lawsuits?

The second category of treadmill injury lawsuits is against gym/property owners. Let’s look at some case examples.

What are some other ways people can be injured by treadmills?

Here, the Court finds that the issue of whether the occurrence which caused Plaintiff’s injuries was “naturally associated with” the defendants’ breach of their alleged duty (i.e., to secure the exercise ball in order to prevent it from moving freely about the gym and becoming a hazard) presents an issue of fact and thus cannot be resolved by the Court on a motion for summary judgment. A rational factfinder could determine that it was foreseeable that placing an exercise ball in proximity to a moving treadmill, where it could come into contact with the belt and disturb the treadmill’s functionality, posed a danger to the person using it. Similarly, a factfinder could rationally conclude that the Co-op’s failure to provide storage racks or other means to prevent the free movement of the balls throughout the gym was a proximate cause of Plaintiff’s injuries.

Let’s look at this photograph to demonstrate: 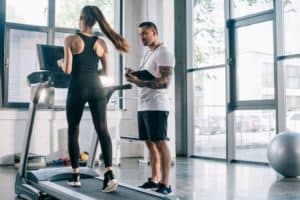 In a treadmill accident, a treadmill injury lawyer will be able to identify these and other issues which may show the gym (or property owner) was negligent.

What clearance does there need to be behind treadmills?

The American Society for Testing and Materials (“ASTM”) is an organization that provides standards for various products, materials, and systems. Courts look to ASTM standards as an authoritative source.  ASTM has a standard for the clearance behind treadmills. According to the ASTM standard F2115-9, the recommended clearance behind treadmills is 78.7 inches, or just over 6 feet.

Let’s look at this photograph to illustrate the importance of clearance behind treadmills: 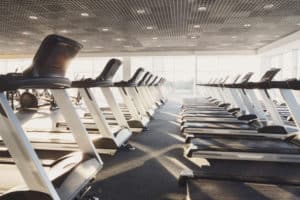 Can gyms be sued for treadmill injuries?

Yes, gyms can be sued for treadmill injuries.

As discussed in the cases above, gyms can be sued for treadmill injuries if, among other things, the gyms did not follow applicable safety standards concerning the treadmill.

What if I signed a release at my gym?

If you signed a release with your gym, you may not be able to bring a claim. I must caution, though, that each claim and waiver is unique, and so the answer to this question depends on the facts and circumstances of your specific claim. Let’s look at an example.

In Savoia v. Fitness Int’l, LLC, 286 So. 3d 310 (Fla. 4th DCA 2019), the trial court dismissed the plaintiff’s slip and fall claim against his gym on the grounds that he signed the gym’s waiver, which was on a computer tablet. On appeal, however, the appellate court reversed the trial court. In particular, the appellate court noted that there were issues of fact surrounding the plaintiff’s execution of the waiver, including whether the presentation of the release on a computer tablet prevented him from reading the release.

As you can see in this example, the question of whether a party released his or her claims against a gym must be taken on a case-by-case basis. An experienced treadmill injury lawyer will be able to review your release and see whether it bars your potential treadmill injury claim.

Can children sue for treadmill injuries?

Depending on the facts and circumstances of the accident, a child, through his or her parents or guardian, may sue for treadmill injuries. Let’s look at an example.

In Ramos v. Camden Property Trust, Hillsborough County Florida Case No. 12-CA-014894, the plaintiff, a ten-year-old child, was playing in an adults-only gym in his family’s apartment complex. The child reached for a ball under a treadmill when his hand was pulled into the machine. Tragically, the child sustained multiple fractures on his right arm as well as a degloving injury. The child pled an attractive nuisance theory, and the evidence reflected that the defendant knew children played in the gym. Ultimately, the jury returned a $2,600,000 verdict.

Of course, if a child is injured by a treadmill, you can reasonably expect the parents will be blamed – in whole or part – for the accident. More specifically, the defendant(s) may argue the parents were themselves negligent for their child’s injuries because they were not supervising and monitoring their child. Generally, though, under Florida law a parent’s failure to supervise is not an absolute defense, but a question of fact for the jury.

Are the dangers of treadmills open and obvious to children?

Generally, the dangers of treadmills may not be open and obvious to children. Courts across the country have discussed this issue.

What kind of injuries can you get from a treadmill accident?

Frequently seen injuries in connection with treadmill accidents include:

What is happening with the Peloton treadmill I keep reading about?

What happened in the video? We will look back at the controversy surrounding Peloton’s treadmills.

In March 2021, Peloton tragically announced that a child died as a result of a Peloton treadmill. This was the second injury to a child, following a February 2021 incident in which a child suffered a brain injury.

On April 17, 2021 the CPSC issued a warning to the users of the Peloton Tread+ following reports of many children and pets being caught underneath the treadmill.

Initially, Peloton was not pleased with the CPSC’s warning. In fact, its CEO issued a harsh response calling the CSPC’s warning “inaccurate and harsh.” However, Peloton backtracked and voluntarily agreed to recall its Tread+ and Tread treadmills. Roughly 125,000 treadmills apply to the recall.

Recently, a class action lawsuit was filed against Peloton in connection with its treadmills. The lawsuit is in its initial stages; we will monitor it closely.

As a treadmill injury lawyer, I proudly represent adults and children injured in treadmill accidents.