Many bicyclists enjoy riding on A1A near the beach. This can bring cyclists to beautiful beach towns, including Gulf Stream and Ocean Ridge, Florida.

Of course, riding on A1A can be dangerous. In addition to attracting cyclists, Florida resident and tourist drivers frequent A1A to access the beach and nearby shops and restaurants. This can create a dangerous mix of cyclists and drivers.

The History of Ocean Ridge, Florida

In 1877, a family from Michigan had the lone homesite in Ocean Ridge. Later, many mid-westerners began to move to the area.

In 1920, the Town of Boynton was incorporated, which included present-day Ocean Ridge, Boynton Beach, Briny Breezes, and a part of Manalapan.

In 1926, the Boynton Inlet was created, connecting Lake Worth to the Atlantic Ocean.

Up until 1958, Ocean Ridge relied on other municipalities for its police force. However, in 1958 Ocean Ridge officially started its own police department which remains today.

As of 2021, Ocean Ridge has a population of 1,831 residents. Of course, Ocean Ridge is known for its beautiful beaches and its quiet, low-key atmosphere.

Notably, the above historical facts were taken from Ocean Ridge’s website.

State Road A1A runs directly through the town of Ocean Ridge. Because of its beautiful ocean views, it is a popular route for cyclists. In fact, on weekday and weekend mornings it is not uncommon to see hundreds of cyclists on A1A, including many riding together in large groups.

Cyclists frequently use A1A in Ocean Ridge. Indeed, it is a scenic route with limited stops.

Additionally, there are signs in Ocean Ridge, like the one below, which remind drivers to provide three feet of distance when passing cyclists: 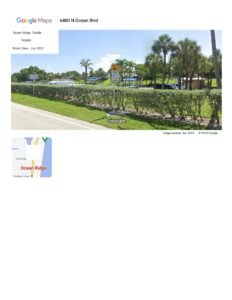 Indeed, while cycling in Ocean Ridge cyclists must be aware of all safety rules and requirements. Drivers, too, must follow all laws when passing cyclists.

At Barthelette Law, we have a number of resources available for bicyclists on our blog. Indeed, we cover a host of bicycle safety issues and discuss Florida laws affecting cyclists. Additionally, we discuss bicycle accident victims’ legal rights, including their rights to recover all available damages under Florida law. Bicycle accident victims may recover their lost wages, damages for pain and suffering, and medical expenses.

We hope you have safe bicycle travels in Ocean Ridge!

If you or a loved one has been involved in an Ocean Ridge bicycle accident, do not hesitate to contact us today at (561) 246-4137! We are ready to help you on your road to recovery.